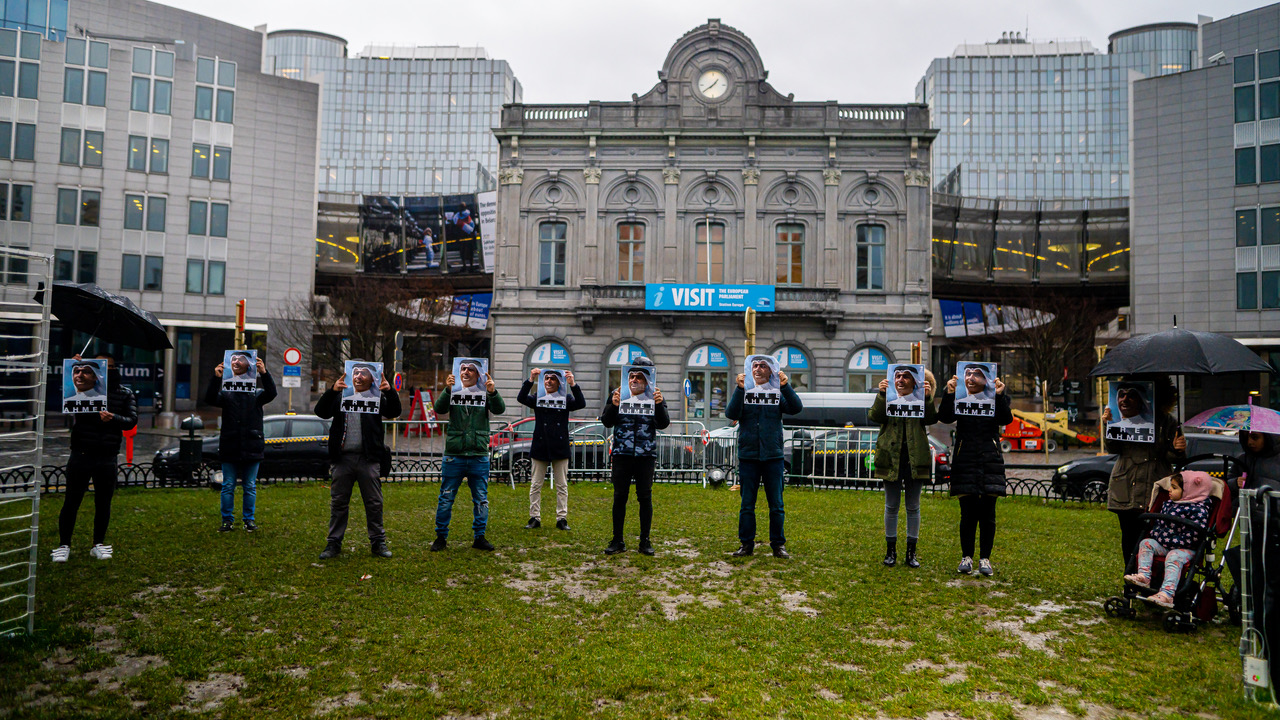 The International Federation for Rights and Development (IFRD) organized today, Monday, a solidarity stand with the prisoner of conscience in the United Arab Emirates, the human rights activist Ahmed Mansoor, in the square of the European Parliament headquarters in the Belgian capital, Brussels.

The stand aimed at calling for an urgent international intervention to save Mansour’s life in light of the serious deterioration of his health in the UAE’s prisons due to medical negligence and ill-treatment and his continued confinement in an isolation cell.

The International Federation thanked the Mayor of the Municipality of Ixelles in solidarity by telephone for maintaining the foundations of social distancing and following preventive measures against the outbreak of the Coronavirus pandemic.

IFRD wish to express its gratefulness to the local police for providing additional protection for the solidarity stand, their strong cooperation, and their prompt response by granting a permit to demonstrate in solidarity with Ahmed Mansour’s deteriorating condition.

And documented reports spoke of a severe deterioration in Mansour’s health after more than three years in solitary confinement without basic necessities, the most recent of which was the joint statement of “Human Rights Watch” and “Gulf Center for Human Rights.”

The two organizations stated in a joint statement that between December 2017 and March 2018, the authorities removed Mansour’s bed and deprived him of sufficient winter clothes or hot water to leave him exposed to the winter cold in his cell.

Mansour, 51, was diagnosed with high blood pressure in late 2018 and no medicine was given to treat him, which puts him at high risk of heart disease and stroke.

Reports also showed that the UAE authorities are forcing Mansour to sleep on the floor without a bed or mattress in a small solitary cell, knowing that he went on hunger strike twice in 2019, which raised concerns about his health and sparked global calls for his immediate and unconditional release.

Emirati security forces arrested Mansoor on March 20, 2017, and for more than a year prevented him from contacting a lawyer and allowed only limited visits from his family. Indeed, Mansoor was sentenced to 10 years in prison in May 2018 after a closed trial on charges of insulting “the prestige and status of the UAE and its symbols,” including its leaders, due to his peaceful calls for reform.

On December 31, 2018, the Federal Supreme Court, the country’s court of last resort in state security cases, upheld the ruling against him and nullified his last chance for early release.

IFRD stresses the need for the widest human rights movement to pressure the UAE authorities to end their violations of Mansoor and the rest of the prisoners of conscience in the country, and to ensure that they fully enjoy their rights, foremost among which is adequate health care.